A site specific stabilisation / solidification slurry was produced on site and through the use of an excavator and associated processing bucket it was combined with the contaminated soils to form a homogenous mass. A total of 2200m3 of material was stabilised. The treatment phase was completed over a 4 week period and the subsequent curing phase lasted 3 weeks. Following treatment, curing and compliance testing, material was utilised as a sub base for the future roads and footpaths.

All phases of the project were achieved within budget and the stabilisation work was concluded 3 weeks inside the project deadline. 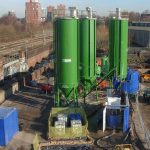